Amazing P.4 for Makar Yurchenko in the qualifying practice.

Saturday of qualifying practice in Twin Ring started with the last free practice for the Moto3 class, which has been run during all the forty minutes in wet conditions. All the riders went out on track to try the grip of the asphalt in this difficult conditions, as also the qualifying session was expected to be wet.

Our Makar Yurchenko kept on demonstrating his potential in this conditions by signing very good lap times to be the fastest during many laps. In the last minutes his bike started to suffer little problems in the brake points, but he has been able to ended up the second, as the first KTM on the standings. Due to yesterday eighteenth position, he had to pass from QP1. Even though the track was drying, the grip was worst than in the morning, and many riders crashed in some corners. Yurchenko also crashed, but fortunately the bike was not so damage and he has been able to complete the session in the fourth position, by going to QP2. With the informations he obtained from the previous session, his mechanics changed a little bit the setting to give him a performant bike. He missed the front row only for a position, but he gained an amazing fourth position for tomorrow’s race.

On the other hand, Kazuki Masaki completed the last free practice session by making many improvements in his riding style in wet conditions. He always prefer the dry track, but time by time, his feelings keep on improving and also his performances. He went out on track for the first qualifying session, where, differently from all the other riders, he cleaned his best lap time of the morning by one second. Despite this, he has not been able to ended up in the first four positions, and he missed the possibility to went out on track also for QP2. Tomorrow the weather is expected to be sunny, so he will try to give his best to gain some positions and stay with the group.

“Despite my dissatisfaction for having missed the first row, it has been definitely a positive day for us. I really like wet conditions, and I always complete good sessions. This morning the track was full wet, but we managed to be in the very firsts positions since the beginning. My feeling with the bike has been perfect until the last minutes, when it started to lose a bit the control while braking. Even so, I ended up the second by gaining the right motivation for the qualifying.  QP1 has been difficult due to the mixed conditions, but finally, passing to QP2, I could achieve a great result, my best grid position in the world championship. I would like to thank all the team for the work they have done today.”

“Today I found it so difficult to complete a fast lap time like the first riders. I always have difficulties having a good feeling with the bike in wet conditions, but finally I’m improving race by race. I have been able to improve my lap time during the qualifying practice, but this has not been enough to obtain a good position on the grid. Tomorrow finally the weather would have to be sunny so we will give our best to try complete a positive race in front of my Japanese supporters.”

Quite difficult first day for our riders in Valencia

The last round of the season already started with the first free practice day. The Grand Finale is being hosted by Ricardo Tormo Circuit, a Spanish track in Valencia which is hosting the last Grand Read more…

First day of progress for our riders in Phillip Island

Seventeenth round of the season has finally started this morning with Moto3 FP1. A strange weather here in the south of Australia, a shy sun in the very early morning let arrived an heavy rain Read more… 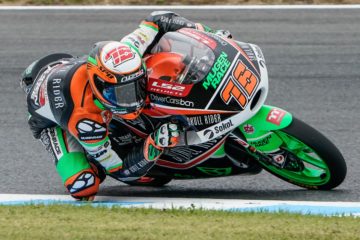 Both our riders ended up very close from QP2 direct qualification.

Sixteenth round of the season for our team, who is finally landed in Japan to start the three back-to-back races. The Japanese round is set to take place on the Twin Ring Motegi, whose name Read more…