The penultimate Grand Prix of the year ended in Malaysia with a great performance from BOÉ Motorsports that could not be reflected in the final race results.

After a positive Saturday for the team with Ana Carrasco’s big step forward, David Muñoz’s domination of FP3 and his good potential shown in Q2 ahead of the race, the BOÉ Motorsports riders started Sunday with a lot of confidence.

These good feelings from Saturday continued in the warm up despite the difficult track conditions and David Muñoz was the fifth fastest rider in this session with a time of 2:23.653.

In the race, Muñoz made a great start from tenth place and by the first corner he was already in fifth position. After the first pass over the finish line the Andalusian rider was already in podium positions and was constantly fighting for the victory until he crashed out with fourteen laps to go.

In the case of Ana Carrasco, the rider from Murcia started the race from 28th place. From the start she was looking to move up positions and, despite encountering several race incidents, she was able to improve as the laps went by. The BOÉ Motorsports rider finally finished in 22nd position.

David Muñoz:“We started the race very well, we were in a good position very early on, I was already in front at the first corner. I think this was a race where we could have got a good result and taken a lot of points, but well, I’m happy with the weekend the whole team did. These things happen, it’s a pity because this weekend I was looking to win, but now it’s time to think about Valencia”.

Ana Carrasco:“Today I’m not very happy, I expected more from the race. I think I had a good pace to have been able to fight for a better result, but the truth is that the start of the race was complicated. The track was wet and I didn’t have a lot of rear grip, and I got caught up in a couple of race spins that caused me to fall off the group. Then I was able to keep a similar pace to the front group. It has been a difficult weekend but I think the team and I have worked very well, we have been able to recover and get the most out of this weekend. Now it’s time to rest and face the last race of the year with full energy to finish the season on a high note”.

The next Grand Prix will be the last of the season and will be held at the Ricardo Tormo circuit, in Valencia, during the weekend of 5 and 6 November.

The Spanish team fought until the last Grand Prix for the rookie of the year trophy with David Muñoz, who missed the first seven races of the season The Moto3 World Championship has come to Read more…

BOÉ Motorsports, among the best on Saturday in Malaysia

David Muñoz will start tenth and led FP3 in his first time at this circuit BOÉ Motorsports continues to prove itself as one of the strongest teams in the Moto3 World Championship. The Spanish team has Read more… 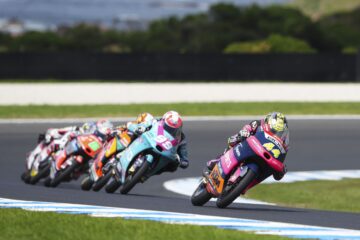